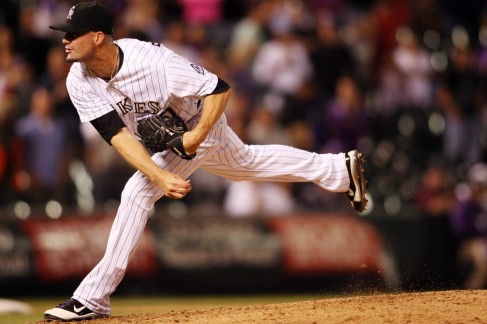 He knows a team can never have too many pitchers.  The Nationals (Nats) just signed another relief pitcher to a minor league contract.  And this one, Josh Roenicke, is shortstop Ian Desmond’s brother-in-law!

On his way up through the minor leagues (in 2007) Josh played for one of my favorite teams, the Chattanooga Lookouts.  He has pitched parts of the past 6 seasons in the major leagues.  Last year he was on the mound for 62 innings with the Minnesota Twins.  Command has always been an issue for him.  For his first appearance in the “bigs” he struck out the first batter, walked the second and hit the third with a pitch.

Josh comes from a blue-ribbon baseball family:  his father Gary played for the Orioles (76-88), brother Jason is now playing in the Toronto Blue Jays minor league system, and his uncle Ron is managing the Milwaukee Brewers.

I remember watching his father play in Baltimore.  In 1979, he and John Lowenstein were part of a platoon that covered left field and produced 37 homeruns and 86 runs batted in!  The Orioles went to the World Series that year.

I wish Josh good luck vying for a spot in the Nats bullpen.