One of my teammates gave me an inspiration of what to call the current phase of The Nats History:)  Tho I have to admit, the 1-0 victory yesterday featured the newly re-constituted bullpen at its finest!

Most of you have already heard how “Mr. ME” (otherwise known as Jonathan Papelbon) made another demand; this latest selfish act was getting Doug Fister’s number, which Doug has had since he became a pro player.  Last night Fister was the starting (and winning) pitcher and he has a new number-33- I think it was.

Meanwhile The Philadelphia newspapers were full of stories about how glad that city is to see the last of Papel-jerk.  I tried to import one here, but had to give up after 30 minutes.

Mike Rizzo likes to brag about how much he and the owners value “character” when they evaluate potential new players.  Sadly, that is clearly not the case, if it ever was.

The rumor is Rizzo negotiating with the Phillies to sign closer Jonathan Papelbon!  This really DISGUSTING!  This guy has been poison to every clubhouse he has been associated with.  He has now demanded that he replace Drew Storen as closer or he won’t come to the Nats!  This has me so upset I’m considering stopping this blog, since this is a message from the Nats that they don’t value their fans or players.

Stand by for more.

Very sorry to see Clip (Tyler Clippard for the “unwashed”) go to the Mets.  But I’m sure Mikey (as in Mike Rizzo) is still after a big back end of the bullpen arm.  That is the team’s biggest need RIGHT NOW!

To be honest Clip has only been having a “good” year (rather than a “great” one) at Oakland thus far in 2015.  And Kimbrell and Chapman are still out there for the asking.  There are others though, who can be had for less such as Juaquim Benoit for example.

One trade-piece I for one would put out there would be Stevie Strassburg. I’ve been trying to get him traded away for two years now, but I get the feeling Rizzo ain’t listening:)  Joe Ross RIGHT NOW looks better than SS to this humble Ponce Ball outfielder!

By the way, I am sorry I have not been posting here more frequently, but I’m busy moving North of the Mason Dixon line.

I debated with myself whether to watch this annual event just before the all-star game.  But this year the format had been changed to speed it up.  So I was curious:).  I’m glad I watched it because the new faster format worked BEAUTIFULLY!  I was able to stay awake to see Todd Fraiser win it in front of his home-town packed stadium (Cincinnati).  But it was close, very close!  Frasier was tied with Joc Peterson with only 30 seconds left.  Then he creamed the first pitch he saw in the extra 30 seconds period to end it victoriously!

The annual “Futures Game” took place this afternoon at the Great America Ballpark in Cincinnati.  It is an all-star game for the best young talent in today’s minor leagues, many of whom are expected to be playing in the major leagues very soon.

I listened to the game on XM-radio as I was coming home from playing in a game myself.  When I got home I turned on the TV and watched the Nationals Trea Turner hit a double and triple.  His speed running the bases is spectacular.  He was one of the stars of the game.

Last Spring Turner was playing for N.C. State University.  This year he has rocketted up to AAA Syracuse already.  Some are expecting him to be the Nats Shortstop by next year.  I listened to a commentator today on XM predict that the trade that brought Turner and Joe Ross to the Nats may end up being the best trade Mike Rizzo has EVER pulled off.

What could be better on a rainy day, than watching a version of baseball invented in Finland?  Check this video out:

And here is a good news article giving some of the background:

Norris (a pitcher) is the Toronto Blue Jays number one prospect.  His story is pretty unique!  While he has a fastball that can hit 96 miles-per-hour, his living style is a bit unusual for a hot pro athlete who signed for a $2 million signing bonus. 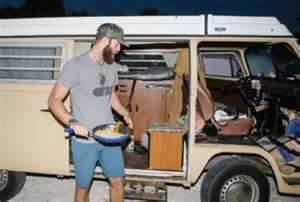 When he heaves the ballpark he heads for his 1978 VW camper-van.  He lives in it and cooks his meals over a gas-fired backpackers portable stove.    At night he parks it in a Walmart lot next to the dumpsters.

Check out the link below for the whole story:)