One can hit and the other can play defense:)  Now if Rizzo would just convince the Lerners that the Nats don’t need a cancer in the clubhouse!  Dumping Paps would help bring the fans back……………….Just saying……..

The Nats could still be looking for a CF not named Spann or Taylor who can hit leadoff.  Several good ones are still available:  Fowler, Blackmon, Gardiner for starters.

As currently constituted, the Nats will end up fighting the Marlins for second place in the NL East.  They will not be a playoff contender.  Sorry Scherzer, you signed with the wrong team, unfortunately.

I was glad to see the Nats make a tough decision as the NL East competition heats up.  Sending the veteran Doug Fister to the bull-pen showed in favor of keeping Joe Ross in the starting rotation is a clear sign the front office is serious about the run for the playoffs.  Starting Danny Espinosa at SS the other day was a similar indication.  And the move to start Robinson at first base yesterday worked well as did sending Ryan Zimmerman in the pinch-hit late in the game!

Baseball is a very fickle game, but yesterday “the gods” were smiling on the Nats:)

All the Nats weakpoints were on display in this poor effort yesterday.  Hitting with runners in scoring position: one for eleven.  The team is ranked 20th I think on this important stat.  Bull-pen sucks!  Running in one rookie from AAA after another for his first ever MLB game, for a supposed WS contender—-simply pathetic.  Blame this one on Rizzo.  Defense?  Good enough maybe for AAA.

All of the above has been commented on here since early spring training.

Let’s hear it again:  Why did the team go after Sherzer when their biggest need was clutch hitting?  Good hitters were available during the winter.

This latest news is a huge blow to the Nats chances for fighting their way to the playoffs.  Both Zim and Bryce got seriously hurt sliding headfirst.

Doug Fister and Wilson Ramos are on the road back however.  It seems possible that Fister could start a game by about May 7th.  Ramos is practicing “lightly.”  It will likely take him several more weeks to regain the strength needed to bat with power in game conditions.  But he hopes to appear in minor-league games this week.

This is the time for the bench players to step up and show us why they made the roster coming out of Spring Training!  I have to admit, after hoping the Nats would trade Danny Espinosa before Spring Training, that he has made me VERY GLAD he is still here!  I did not think it would be possible to make Danny a major league hitter, but I was wrong:)  I’m impressed with the improved hitting thus far.  And we all know he is a gold glove calibre fielder.  In fact many of the usual suspects posting on the team website are calling for Danny to REPLACE Ian Desmond at SS!

Late breaking news:  Zack Walters has been sent down to Syracuse as well as Taylor Jordan. Ryan Mattheus is back up here.  The last time Mattheus pitched well was in 2012; I hope they don’t have to use him in a critical situation.  Maybe they want to have him in case they need a “mop-up” pitcher in a game that has got out of hand:)  I also hope they bring Souza back. 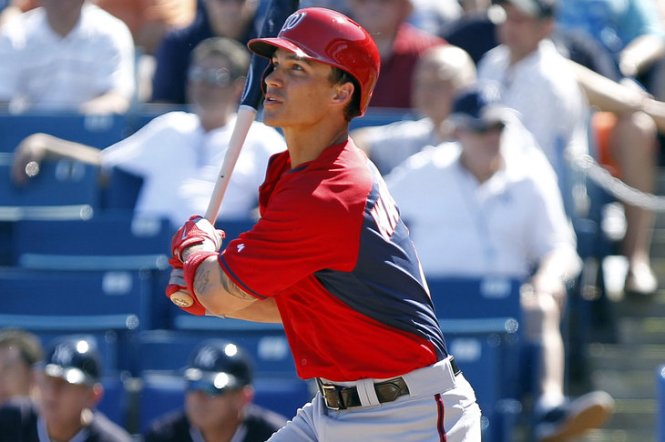 With the recent spate of injuries to the opening day roster, the Nats have called on several new bench players as well as Syracuse call-ups (i.e., Zack Walters– above) to show what they can do!

With the bullpen tired from overwork in the Atlanta series they needed a fresh arm who could pitch long relief if needed.  Blake Treinen filled that need, so space was made on the roster by sending Aaron Barrett down, since he had just pitched in consecutive games.  Treinen has impressed with his ability to remain calm under pressure and get hitters out.  No one doubts that  “Bear” Barrett will return soon though.

Kevin Frandsen and Danny Espinosa are red hot with the bat and are seeing significant playing time.  Danny is showing commendable calmness when hitting and has cut way down on strike-outs, compared to 2013.  Though Frandsen has not played much in the outfield prior to this season, he showed his infield experience in Atlanta by back-handing a ground shot to the left-field corner (normally a double) and firing it to second quickly to hold the batter to a single!

Both Tanner Roark and Taylor Jordan are in the starting rotation while Doug Fister comes back from injuries.  They are showing good poise but need to lower their earned run averages.

I first encountered Tom Boswell, the Washington Post sportswriter, while sitting on a beach on the island of Mauritius in 1986. I discovered what a good writer he is while reading his book How Life Imitates the World Series. It was the best baseball book I had ever read, up to that point. From time to time, my international career has brought me back to Washington, D.C. and since reading that book I started paying more attention to Boswell’s frequent articles in the Washington Post. Most are about baseball. He is my all-time favorite baseball writer.

His article in the Post on March 22 (2014) is a typical ‘perfect pitch’ from him, about how Las Vegas and the media are again predicting the Nats, on paper, are the best team in the National League. They did the same thing last year at this time, and we all know how that turned out. I sure hope the team is not paying much attention to this type of hype right now.

Boswell’s March 30th article was an astute piece about how much (or how little) the manager can influence a team’s fortunes. The Nats opening game (March 31) was a textbook example of this. Last year’s Nats would not have won that game. (Note: I have lot’s of real affection for Davey Johnson, who is not a bad manager at all. It’s just that his “time” had passed; the Nats needed a change in managers.)  In yesterday’s game the Nats simply refused to lose! They clawed their way back from the abyss several times and finally prevailed in the 10th inning. And new manager Matt Williams’ affect on the team was crystal clear to me as I watched most of the game. He made numerous decisions such as bringing rookie Aaron Barrett in to pitch the 9th inning (his first major league game ever). This took GUTS! But it worked. And I may never forget the walk that Danny Espinosa worked after eight pitches in the 9th inning! Danny has been (until March 31) a very impatient batter who could be induced to swing at almost anything that moved. He was a pitcher’s delight, until yesterday. Again, Williams brought Danny into the game at the right time.

Boswell’s March 31 piece was another thoughtful, well-researched article about what opening days of a new season are all about.

Boswell has written several books. Besides the one I mentioned above, I’ve also read  and enjoyed Why Time Begins on Opening Day.

A lot of Gnats fans are wondering how the competition to fill the fifth starting pitcher slot is likely to be resolved.  Well, here is my humble opinion.  And I’ll preface it (as an experienced gamer) by saying such competition is very healthy and the Nats are extremely lucky to have so much talent in Spring Training Camp!

Ross “Det” Detwiler:  I think this is his to lose, and I say this for several reasons.  First, he has the most quality major league experience.  Second, he is out of options (he can’t be sent back to the minor leagues–there is a rule limiting the number of times a player can be sent down to the minor leagues).  Third, he was VERY EFFECTIVE early last season, until he got injured.

Tanner Roark:  Many will argue he should get the nod, as he was arguably the Nats best pitcher over the last 6 weeks of the season last Fall.  I too was impressed with his success last year.  And this will likely mean that if Det is the fifth starter, Tanner Roark will be the “long man” in the bullpen.  So the team wins either way!

Taylor Jordan:  With the least amount of major league experience, unless Jordan really lights up the scene in Florida, the best thing for his development would be to start the season with the Nats’ AAA team in Syracuse , pitch a lot and be ready if someone gets hurt on the parent team.  This is a talented kid with beaucoup upside potential who may actually be ready for THE SHOW if the team had a space!

On to the “Danny Watch.”  Whoopee, he got his first hit yesterday.  It’s only Spring Training, and the new manager has to give Danny Espinosa a chance, but I think the hand-writing is out there.  After 2+ seasons in the bigs, Danny just cannot hit big-league pitching.  Meanwhile, among the infielders in camp, Zach Walters can, Anthony Rendon and Jamey Carroll can, and some of the other “kids” are looking good too.  I recommend Mike Rizzo call Bo Porter (Houston manager and former Nats’ third-base coach) and work something out to ship Danny to Houston.  They need lots of new blood in Houston!

In the past week, there has been a minor flurry of meaningful activity that will bolster the Washington Nationals’ propects for success in 2014. While Anthony Rendon will be the likely starting second baseman, every team needs backup players. Former Nat, Jamey Carroll, was signed to a minor league contract. I predict this master utility infielder will make the major league roster. Besides having all the tools to really help the Nats, the team is far from confident infielder Danny Espinosa will make the roster; he cannot hit big league pitching.

Meanwhile a former teammate of Ryan Zimmerman at University of Virginia, slugger Mark Reynolds, was rumored to be a possible Nationals’ addition. That would have been a mistake (but an understandable one since Nats General Manager, Mike Rizzo, had signed Reynolds for the Arizona Diamondbacks in 2004). Reynolds has proven to be a human strikeout machine, setting several all-time major league records in that department! Luckily for the Nats, Reynolds signed Friday with the Milwaukee Brewers.

Also on Friday, January 17, the team reached agreement on two-year contract extensions with Ian Desmond and Jordan Zimmerman. Desmond will also get another $500K bonus if he wins the National League MVP award (he was considered for the award last year). Both players had been negotiating for longer-term deals, but ran out of time as the arbitration deadline loomed. Four others were also signed by the deadline to one-year deals: Drew Storen, Ross Detwiler, Wilson Ramos and new relief pitcher Jerry Blevins.

Apparently General Manager Mike Rizzo agrees with me that the bullpen needs more. He is talking with Grant Balfour, who is expected to decide any day now which team he will play for this season. Balfour was the closer for Oakland in 2013 and saved 38 games. If the Nats grab him, the move may presage a trade of Drew Storen.